Our Taupe is a neutral, medium earth tone or mushroom color. It looks brown compared to greys like our Stone or Slate but looks grey compared to tans and browns like Camel or Mocha.

Use it like a dye on aniline, full-grain leather and vinyl upholstery to:

It applies easily with a sponge and will not alter the feel. It won’t peel or rub off onto clothing.

Each bottle comes with gloves and stir stick.

Please read about dramatic color changes before undertaking one.

If you need an exact color, try our Color Matching Services!

Theresa T Speakman
Rated 1 out of 5
The color didn't match the online sample. It costs me $14.00 in shipping to return it. They added a restocking fee of $11.99. The $47.99 tiny bottle that I couldn't use and was overpriced cost me $25.99 just to return it. I had planned to reorder, however I cant afford their prices to return an item when I can purchase from Amazon with free shipping and free returns.
Reply from lesandre:
Our website encourages the ordering of swatches and offers matching services due to the difficulty in matching color over a screen. Our return policy is clearly stated and merely mitigates our loss in shipping. We are a hands-on mother-daughter business offering a unique service you ain't gonna find on Amazon. In fact, Amazon has infringed on our trademark, and we refuse to sell to them. 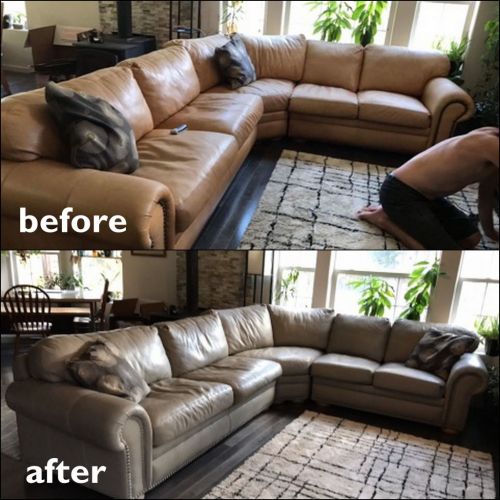 Emily Noelle
Rated 5 out of 5
Love the new look. Thank you! Debi
Rated 5 out of 5
I spoke with the daughter right before  Christmas. You were very helpful.   I ordered two large taupe colored dye as my couch seats 7. I covered every inch 2 coats. Absolutely beautiful! Looks brand new. I am very happy. I will order a small bottle for touch ups if needed. Otherwise  it’s wearing very well.
Helda Montero
Rated 5 out of 5
Ok, the bottle is full of magic. We had a very green couch and turned it a beautiful and modern taupe. You absolutely can not tell that it was not the original color. Application was a breeze. Our sofa had lots of tufts and crannies, so I found it easiest to lay each piece on it's back so I could easily get to all areas. It dries unbelievably fast and does not look like paint or dye sitting on the leather. You can tell at all. Can't say enough good things about the product. It's only been one week so I can't speak to the longevity, yet. But if it's anything like this I will be over the moon.

Patrick, Kanata, Ontario, Canada
Rated 5 out of 5
It was so easy! These pictures don't do it justice at all, but you can see the stain. I had made a slip cover just to "live with it". It was an expensive chair and our favourite. Your taupe was just a little too dark so I mixed just a little of the white with it after using your cleaner and with just a few coats it covered beautifully and blended in so evenly. A few more coats to be sure and then seal it......all done. My friend who put me on to your wonderful product said if it didn't match just do the whole chair! That would've been equally as easy to do but there was no need. It is brand new again. I used so little of your product, I'm on the hunt for something else I can stain. I am very pleased with your goods and the friendly, patient and knowledgeable guidance you gave over the phone. It was my pleasure to discuss this all with you and the next time I have a project that needs a different colour, I'll know where to go: to the same place that I'm ready to send anyone I come across with a leather or vinyl problem. You're great! Thank you.

Tyler, Lakeville, MN
Rated 5 out of 5
Wow, this is amazing. We are speechless. Elizabeth, Sarasota, FL
Rated 5 out of 5
AMAZING!! We are so pleased with your product, and it was so easy to use. I have sent two folks your way. They both saw our recliner and could not believe the results. Thanks for all your advice and your great product!” Suzette, Matthews, NC
Rated 5 out of 5
I finally got around to doing our couch. Very pretty. I only had one problem, but after I messed up, Ithink I know what I should have done. When I put on the last coat of sealer, where the couch arm flops over or between the back and the arm, it kind of stuck and took off the stain. I guess I should have held it “open” to dry. Overall, though, I’m quite pleased. Looks so much better! Thank you for all of your help.
Christina
Rated 4 out of 5
Here is a review on how it wears with tons of kids, etc. I did a couple colour changes and some mixing of colours as well (and some distressing, fun). My chair went from the original colour of orange to the taupe colour. Then after talking to you about the orange bleeding through, I dyed it with the walnut that you sent. In my space and lighting, it ended up looking kind of like a chocolate bar. So, I mixed some of the taupe, walnut and glaze together after doing several coats of the walnut to make it darker. After that, i took a green scrubby and gently went over it to make it look more distressed. It ended up looking just like the restoration hardware sample I had of distressed whisky. After a year of ware and tear with 6 (now 7) kids, it is starting to look like its sort of scaly? I think it needs conditioning but the clear doesn't quite do it, in this case. I may need to scrub at it a bit in case it just has too many layers or something) and maybe get some of that compound stuff you have if that doesn't work.

Next is my couch. It started out a beige colour. I dyed that to taupe (maybe even when the chair was still taupe) and that was great. it was wearing VERY well. Nothing wearing off at all. It just looked like it had almost a greenish tinge to it...it was probably my imagination. But, it wasn't working for me (I am an incredibly indecisive person...which is why this product works for me). I probably had the wrong idea of the colour it was supposed to be. I must have been expecting (or hoping for) more of a greige or a linen colour. Anyway, I went over that with the walnut as well after a bit and was planning on distressing it to look like the chair but it was working much better for the couch than it did the chair (most likely because the couch had a lot of texture). I actually really liked the way the dye on the couch was wearing down. It gave me the distressed look I like so much. Now, though...it's getting a bit TOO worn out. I can just take my dye and freshen it up if I wanted (and may still do that)....but as I've been changing the room around...I'm feeling like I want to go lighter (again...I'm an indecisive person who likes changing things up). That way if it wears down, it wont be quite as big a contrast. So, I've started work on stripping the dark colour to help that. It's actually coming up quite easily.....I'm wondering if maybe I didn't prep my couch properly and the dye isn't sticking quite as well as it should because of it. But, I do have a ton of kids that are hard on the furniture.

Lots of people have seen my couches and they are really impressed and I know several people have gone and bought some for themselves.

So, my overall review is that the product is easy to use, makes a huge difference and is great because you can change it up whenever you want. But, I think it is probably best if kept close to the original colour (stay dark or stay light) just because it becomes so obvious when it wears down. Neither of my pieces had colour wear, stains or sun fading originally. I just wanted them a different colour. This is a super amazing product, especially if used for its intended purpose (to restore a piece...not drastically change it).
Patrick
Rated 5 out of 5
Our favorite, expensive chair had an oil stain. I had made a slip cover to "live with it". Your taupe was just a little too dark so I mixed just a little of the white with it after using your cleaner and with just a few coats it covered beautifully and blended in so evenly. A few more coats to be sure and then seal it......all done.
My friend who put me on to your wonderful product said if it didn't match just do the whole chair! That would've been equally as easy to do but there was no need. It is brand new again!
I used so little of your product, I'm on the hunt for something else I can stain. I am very pleased with your goods and the friendly, patient and knowledgeable guidance you gave over the phone. It was my pleasure to discuss this all with you and the next time I have a project that needs a different colour, I'll know where to go: to the same place that I'm ready to send anyone I come across with a leather or vinyl problem. You're great! Thank you.
Suzanne O.
Rated 5 out of 5
Ordered this to touch up my Lane sectional in #15 Grand Putty. It was a perfect match. This was very easy to apply and dried quickly. Frank
Rated 5 out of 5
Thank you so much for the youtube videos, the assistance on the phone, and for sending me the perfect products for my needs. I got a used real leather couch and loveseat set for $100. I cleaned them thoroughly with 409, then applied the stain followed by the clear coat. The set looks like new and I have already highly recommended your products and your company to my friends and family.
a happy customer
Rated 4 out of 5
This product is excellent. I ordered taupe color and is a little lighter than the original , that is the only reason i gave four stars instead of five. But i covered whole chair anyways and i have plenty of product left for sofa . I ordered the large bottle with a small bottle of the finish. I was surprised at how fast it dried . My husband says it looks new again, and was thankful we didnt have to buy new furniture !!!! I would recommend this to everyone i know !
james McCue
Rated 5 out of 5
Had a couple of couches that were incredibly comfortable, that looked like they were ready to be retired. I didn't want to replace them because it takes to long to get something that fits your ass just right, but I didn't want the ugly things in my family room either. I used the product as instructed, they look like new. It did not change the texture of the leather. My butt still settles in nicely. Love the product, love the customer service. Very happy customer.
Janet Mills
Rated 5 out of 5
Just finished one of my chairs and am very impressed with the product.
The color was perfect, easy to use. The ottomans that I finished two weeks ago seem to be holding up fine. Christina, Glenwood, AB, Canada
Rated 5 out of 5
I am pleased with the product. It doesn't feel weird or have a strong smell, and it dries quickly.